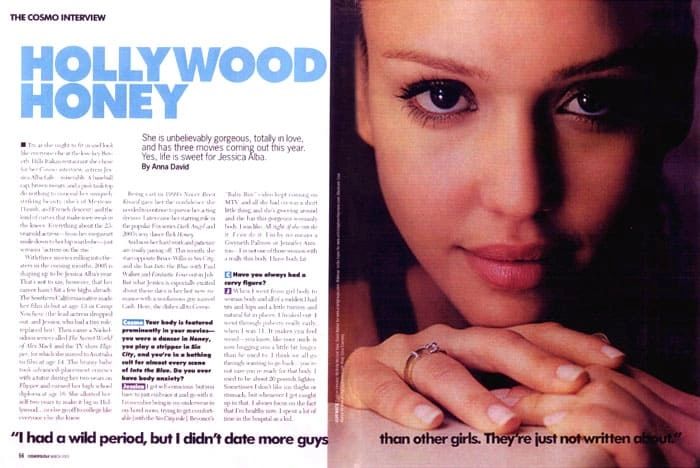 Try as she might to fit in and look like everyone else at the low-key Beverly Hills Italian restaurant she chose for her Cosmo interview, actress Jessica Alba fails…miserably. A baseball cap, brown sweats, and a pink tank top do nothing to conceal her uniquely striking beauty (she’s of Mexican, Danish, and French descent) and the kind of curves that make men weak in the knees. Everything about the 23-year-old actress – from the megawatt smile down to her hip wardrobe – just screams “actress on the rise.”

With three movies rolling into theaters in the coming months, 2005 is shaping up to be Jessica Alba’s year. That’s not to say, however, that her career hasn’t hit a few highs already. The Southern California native made her film debut at age 13 in Camp November(the lead actress dropped out, and Jessica, who had a tiny role, replaced her). Then came a Nickelodeon series called The Secret World of Alex Mack and the TV show Flipper, for which she moved to Australia to film at age 14.

The brainy babe took advanced-placement courses with a tutor during her two years on Flipper and earned her high school diploma at age 16. She allotted herself two years to make it big in Hollywood…or else go off to college like everyone else she knew.

Being cast in 1999’s Never Been Kissed gave her the confidence she needed to continue to pursue her acting dreams. Later came her starring role in the popular Fox series Dark Angel and 2003’s sexy dance click Honey.

And now her hard work and patience are really paying off. This month, she stars opposite Bruce Willis in Sin City, and she has Into the Blue with Paul Walker and Fantastic Four out in July. But what Jessica is especially excited about these days is her hot new romance with a nonfamous guy named Cash. Here, she dishes all to Cosmo

COSMO: Your body is featured prominently in your movies – you were a dancer in Honey, you play a stripper in Sin City and you’re in a bathing suit for almost every scene of Into the Blue.

Do you ever have body anxiety?

Jessica: I get self-conscious, but you have to just embrace it and go with it. I remember being in my underwear in my hotel trying to get comfortable [with the Sin City role]. Beyonce’s “Baby Boy” video kept coming on MTV, and all she had on was a short little thing, and she’s grooving around and she has this gorgeous womanly body. I was like, All right, if she can do it, I can do it. I’m by no means a Gwyneth Paltrow or Jennifer Aniston — I’m not one of those women with a really thin body. I have body fat.

C: Have you always had a curvy figure?

J: When I went from girl body to woman body and all of a sudden I had tits and hips and a little tummy and natural fat in places, I freaked out. I went through puberty really early, when I was 11. It makes you feel weird – you know, like your uncle is now hugging you a little bit longer than he used to. I think we all go through wanting to go back – you’re not sure you’re ready for that body. I used to be about 20 pounds lighter. But I get inspired by other women who embrace their curves. Sometimes I don’t like my thighs or stomach, but whenever I get caught up in that, I always focus on the fact that I’m healthy now. I spent a lot of time in the hospital as a kid.

C: What was wrong?

J: I had severe asthma and kidney problems and would get 105-degree fevers. I actually almost had to go on dialysis for my kidneys. I was also in the hospital for pneumonia.

C: Aside from that, what were you like growing up?

J: I never fit in with my peer group. I never hung out with kids my age — I always wanted to hang out with my mom and her girlfriends. I was on a TV show when I was 13, and had a tutor for high school. Everyone was like, “Oh, you’re missing out on the high school experience,” so I’d go with my cousins to these parties where there would be a keg and people doing body shots and playing quarters. I was like, What a waste of time. I didn’t want to be doing E [ecstasy] and making out with a guy three years older than me who’s a loser.

C: Did you have a lot of boyfriends back then?

J: I basically went out with any guy who asked me because hardly anyone ever asked me out. I remember this one guy – oh, he really liked me. He was so boring that I ordered a hamburger and ate it in a really masculine way, like a pig, dripping and chewing with my mouth open. I think I even may have burped…anything to get him not to like me so the date would finally be over. But he just liked me more. It was horrible. I didn’t really [seriously] go out with any guys until I was 18 and met my ex-fiance, Michael Weatherly.

C: What happened between you and Michael?

J: It just didn’t work out. I was so young when I started dating him. I was a virgin. I knew I wanted to be in love with the first person I slept with, because for almost everyone I knew, the first experience made them feel like shit. So I wanted to be really careful that he was going to be in love with me and wasn’t just going to leave me. It’s really, really, really difficult to have the same occupation as the person you’re with – especially when you’re both actors. Actors are pulled in so many different directions that unless you both are absolutely into it through thick and thin and completely sure about each other, it’s just hard. I’ve decided I’ll never date an actor again.

C: Are the rumors that you dated Mark Wahlberg and Derek Jeter true?

J: I don’t want to say, but I will say they’re both really nice guys. It’s funny because my mom would [read about me dating someone and] go, “I want to meet so-and-so.” Or she’d say, “You’re not dating him as far as I’m concerned because I haven’t met him.” I had a wild period with men for a second, but I wasn’t dating any more guys than any other girl – it’s just that most people aren’t put in magazines.

C: Do you think it’s important for girls to play the field a bit before settling down?

J: I just wanted to see what it was like to be with different people. I don’t think a girl’s a slut if she enjoys sex. I could have a one-night stand, and I’m the kind of girl who looks over in the morning and is like, Do you really have to be here? I don’t need to cuddle and do all that stuff because I know what it is and I don’t try to make it more. I feel like a lot of women try to make it into more, so they don’t feel so bad about just wanting to have sex. I don’t really have a problem with wanting sex. Never have. Even when I was a virgin and wanted to marry the first guy who I slept with, I never passed any judgments about that. But now I’m done [with dating around].

J: Yes, his name is Cash…he’s not famous. He might The One. It was kind of a love-at-first-sight thing, but I met him when I was dating someone else, so it started off as a friendship. I was actually attracted to his spirit and mind before it went to a physical place. We’re both old people in young people’s bodies. The first week that we kind of got together, he gave me a note and signed it with a dollar sign, because his name is Cash. It just said, “I really, really like you.” And that was exactly how I felt at the time. Really, really liking him too much…I was already in love with him. And I hated it because it was terrifying that I cared about him so much right away and I already wanted him to be around forever.

C: Do you guys ever fight?

J: The reality is that his faults are very similar to my faults, so I can’t really be pissed off about it. He loses things all the time; so do I. He’s late; I’m always late. People are unbelievably giving and caring and understanding of me because of what I do for a living and because actors get their asses kissed everywhere they go, so I can be extra-understanding in a relationship.

C: So you’re done with dating stars now…but do you still have any celeb crushes?

J: I really like older British guys – I don’t think any of them would ever have a problem with crying in front of a woman or saying “I love you” or “You hurt me” or emotional stuff like that. I’ve also always been attracted to guys with big brains. And when I was young, I loved black men. All of my friends were black. I think people couldn’t really put me in [one race]. I wasn’t Mexican, I wasn’t white, I wasn’t black, I wasn’t Asian…I wasn’t anything, and I didn’t really fit into anybody’s group. My dad is Mexican, and my mom is French and Danish.

C: You seem pretty comfortable with who you are, but is there a quality about yourself you really wish you could change?

J: I think my temper.

C: What’s something that you hate about this business?

C: You’re producing the upcoming flick Sonic. What made you want to produce?

J: A lot of actors do it because they just want to be fancy and have the executive producer credit and walk around like, “I’m a producer.” I guess it’s mostly about power and status for them. I actually wanted to be a producer because I like to run things. I like to organize. I have an opinion. I like to get stuff done.

C: What do you like to do when you’re not working?

J: I like to cook. I would probably go to culinary school in France if I had time. I can seriously spend five hours making one dinner. I especially love to make enchiladas and lasagna. I also love to play golf. My mind is constantly in five different places, but golf is great because it forces you to focus completely and purely on what you’re doing.